What was the "wake-up call" that got you into Privacy & Security?

Continuing the discussion from What brought you to Techlore?:
I have been doing this for quite some time so I might be wrong but I faintly remember watching The Social Dilemma and thinking to myself that it’s time for a change, and the snowball effect began…
I think this was the turning point that got me to improve my online habits.
What was yours? 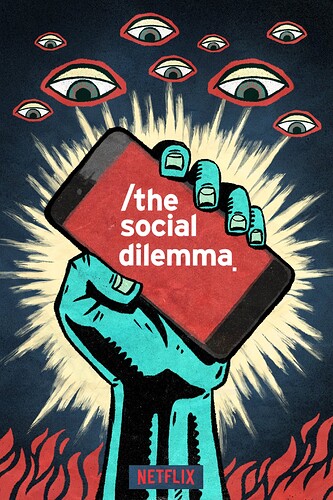 My bank had to verify my identity for a new account and said they were going to ask me some questions.
(these were not simply those standard questions you setup yourself like mothers maiden name, what was your first pet’s name, etc)
They knew more about me than I did.
They asked things like, “What street in Houston does your older sister Ann live on?”
“What magazines did your family subscribe to when you lived in Austin?”
It really freaked me out.
(and, I couldn’t remember the answers)

So did they manage to verify your identity?

In my case i dont remember if there was a wake up call. Privacy was always important, there was a period when i didnt think about it too much and was ready to compromise but things then improved.

One issue that did affect it strongly is the increased censorship.

For me it was right at the beginning of the rollout of Windows 10 and all the talk about its data collection. That, combined with the fact that my given + family name make me inordinately unique and made looking up where I live extremely simple, pushed me towards finding solutions.

I got into it when I was in my mid-late teens. Folks were on Facebook, creating posts, doing those “How much do you REALLY know me?” quizzes, and FarmVille crap. I didn’t really understand the platform, often looking at that feed, and thinking, “what was the actual point?” From there, I went down a rabbit hole of data privacy, and learning more and more, especially once I studied IT.

A recent wake up. I changed some contact information with Capital One. I used this card for one purpose, only one. To pay home auto insurance.
The contacted me and it started to sound like a Scam. They wanted to send me a third part app to send pictures front and back of my drivers license.
I told them i was concerned, i don’t have time right now to send my ID. I said I checked my transactions and I don’t see any fraudulent charges, what are your fraudulent concerns. I was told they can not discuss this until we prove identity. I asked for an alternative way to identify. There was no option.
I said well lets just agree that what I can not see is fraudulent, so i want to close out this card and get a new number. “So you want to close the account”. I’m pissed now, sure lets do that.
She said your statement balance is $53 which was correct, would you like to come out of your account ending in 56. I said yes and my account was closed.

I used a simglelogin or similar email, and updated my contact phone number, a real number. This was enough to flag me and force me to share my ID.

this is so scary

Yes, eventually I was able to answer enough questions but it was pretty disconcerting doing a multiple choice exam about my life history.

I had tried to be security-conscious for years and somewhat privacy-conscious, but to be honest what got me more involved recently was a conversation with a new friend that pointed me toward Linux and other security concerns with messengers specifically. Found Techlore’s video about Discord and YouTube did the rest, lol.

Being gay and in the military under Don’t Ask Don’t tell meant a very real need for privacy with a fairly high threat model. Thankfully the law changed within a couple years of me commissioning, but the importance of privacy and security has remained seared into my brain.

Led me to be an early adopter of things like VPNs, secure messengers, device encryption, and was even an original Protonmail beta tester (and indiegogo contributor lol).

In a time where I was a heavy Google user I somehow stumbled upon r/degoogle and started to question why I should care about Google knowing pretty much everything about me. I basically fell into the rabbit hole of privacy and eventually started to care.

“What magazines did your family subscribe to when you lived in Austin?”

w10 is the single worst OS ever made privacy-wise, it’s sad a lot of people are forced to use it for work and important stuff

“How much do you REALLY know me?” quizzes, and FarmVille crap.

I REMEMBER THIS you just unlocked forgotten memories.
I used to do it aswell cause everybody did but I found it boring pretty quick.

I’m actually happy people are starting to care more about this, my family (which isnt privacy cautious at all) has been sending me links about articles that’s telling people to switch to signal and delete meta and stuff and I’ve been educating them and facilitating the change!

Led me to be an early adopter of things like VPNs, secure messengers, device encryption, and was even an original Protonmail beta tester (and indiegogo contributor lol).

I am not sure i would call it a wake up call. More like a journey. At this point it was no secret that google are gathering data and privacy is something that was important to me and it hit me that they might be,reading my emails (i was using gmail at the time) so i looked up other email provider and this is were my journey begin

Funnily enough, I think I fell into Privacy “backwards”. Like my school had Linux running on a couple of PCs at some point, I found out that it ran really well on my old laptop, and when I started looking into Linux, I found PrivacyTools and it just kept snowballing from there.

Security-wise, similar story although the first major step I took was when I learned that credential stuffing was a thing and started changing my passwords and separating it a bit. After that, like Privacy, it was a gradual journey as I learned more and more.

I suppose the biggest thing was Snowden. Knowing that Big G is watching everything you do is a little unnerving.

I think I started my privacy journey when the general awareness around seeing ads about things you talked/searched on Google/Insta.
I got particularly spooked when I read an article posted by somebody about seeing ads of things she was ‘thinking’ about.
That’s how I became aware and wrapped my mind around the fact that all this ‘free’ stuff is not free afterall. I often think now how naive I was to never even consider where all this information I am so easily giving going towards. ( I am still up at night thinking of all my data and activity in the past, keeping in mind https wasn’t a thing back then and what not)

I love,love, love information and I think that’s how I found Snowden around this time in general and started understanding surveillance better. Then as I am a student, social media was ruining my concentration and self esteem, so I gathered some courage to get off it forever. The Social Dilemma helped here and Cal Newport’s books (Deep Work and Digital Minimalism in particular)
I am proud to say I haven’t been on any big tech social media for 1.5 years now. I am sober.
I also know who my real friends are now lol

I now follow people who are much ahead in their privacy journey, read books related to it and do my own research and be suspicious of everything related to the internet. I also have younger siblings and I educated them like I wish someone did with me.

i think techlore’s become anonymous guide showed up in my recommended and i was like “why not im bored, might as well see what this handsome bastards gotta say” and thats how i started down the rabbit hole

My wakeup call was when I learned that the Chinese government was talking about “how to deal with me” after I leaked chat logs showing corruption between top CCP officials. My Weixin Pay (similar to PayPal, but inside of WeChat) account was mysteriously drained right after the leaks happened, and it was very creepy to have the government watching my every move.

Now I use Monero for sensitive transactions, as well as Status for end-to-end encrypted, peer-to-peer messaging, and have had no issues. This setup works well, considering centralized (Signal) and federated (Matrix) chat systems get easily censored.

Arguably, I never really had a “wake-up call” per se. Rather, it is a consequence of the new reality and situation I got (which became permanent) when I started working in the financial services industry a few years ago.

It started when I gradually started to see that generic, personal accounts were becoming really outdated and even impeding what I want to do. So, I spent some time reorganizing my online presence by having every account I have be for a specific purpose.

For example, it can be argued I technically deGoogled because I do not use Google for personal matters anymore. However, it can also be argued I would be a chaotic rogue to r/Degoogle because I still use Google for enterprise purposes, primarily Google Cloud. Microsoft also got the same treatment.

(I cannot emphasize enough, even if Google and Microsoft didn’t have privacy problems, that this reorganization would’ve been inevitable. Cloud and Azure are just miles more amazing and better than G Suite and MS Office. Considering they’re now effectively enterprise-first companies, I argue that Google and Microsoft should look to abolish free tiers in the future. How valuable are paying customers compared to ad-backed customers? Curious.)

And from this reorganization came an increased pique in how things work. If you’re a Google and Microsoft enterprise customer, the problems and successes they have become a really interesting tale of contrasts. A testament to this pique is me primarily having four messengers: Signal, Session, Briar, and Element. To me, these four have innovations that deserve more merit and conversation. With friends, what I do is I ask them which two they want to use, one as the main and one as backup. Though, the success of that approach has been very mixed…

So, a new reality I have come to terms wrote on the wall what was inevitable, starting with reorganization towards agility. Some other thoughts:

And as for me being onboard that privacy/security aren’t isolated concepts and really valuing OPSEC and threat modeling is from a really strange, yet borderline horrific behavior I saw during my years in community college where some flat out had no threat model. They strived for privacy to the point that everyone started to question who they really were and if they were even real. You can argue they had a threat model. Though, when I kindly asked what their extreme name-hiding and all that was for, they often gave incoherent answers, like to “get away from” something, usually the college system or something.

When I transferred and discussed this, everyone was very negative towards this. Not a single person ever said they understand or the situation is understandable. Even a professor I conversed with who started to self-host her email to “get away from the data-sucking Gmail” very sharply criticized the strange behavior, with her initially asking “Who does that?!” and sounded a little horrified with what I saw.