Hi, I read this article on privacyguides and I was interested. 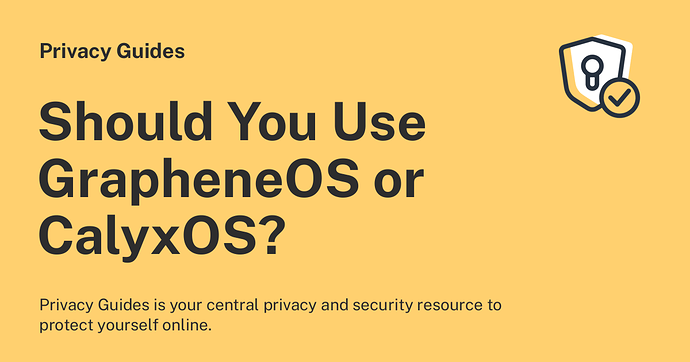 I’m using CalyxOS with microg and I’m thinking about switching to grapheneOS.

I was wondering, between the two, which one:
. Is the most private
. Is the most secure
. Has the most app compatibility (+99% if not 100% of apps on the playstore. Games included)

I would also like to know all the cons of grapheneOS as well.

Thanks for helping me.

Is the most private

Quite similar, although sandboxed play may be more private than microG

Is the most secure

Has the most app compatibility

Should be similar, although sandboxed play on Graphene may be better than microG

That probably isn’t possible unless you use stock Android. Check https://plexus.techlore.tech to see what you can expect with microG (sandboxed play will be similar) and completely deGoogled

I would also like to know all the cons of grapheneOS as well.

I have had a few bugs (not sure if they’re Graphene-specific or not), the main one being sometimes apps get stuck in recent apps and cannot be closed or opened from the recent app menu; very annoying, hopefully it’s fixed soon. Started with an update a few weeks ago.

I have had a few bugs (not sure if they’re Graphene-specific or not), the main one being sometimes apps get stuck in recent apps and cannot be closed or opened from the recent app menu; very annoying, hopefully it’s fixed soon. Started with an update a few weeks ago.

Have you tried reinstalling the apps?

I have had similar issues, I think it has to do with some change in permission, reinstalling fixed several apps that were freezing/crashing for me.

It happens with a lot of apps (maybe all, i’m not sure) but that includes system apps like Vanadium that cannot uninstall.

Which version has bugs?

As you have already read from that article, the answer is GrapheneOS. If you install sandboxed Google Play services, you will have essentially no issues with app compatibility.

I’m on the latest version on a Pixel 6a. Might be an AOSP issue though. It also might not happen with every install

I think @alex adequately addressed your questions. However, as an active user of both CalyxOS and GrapheneOS (on different devices), I would add that I’m hard pressed to think of a reason to choose CalyxOS over GrapheneOS.

I started using CalyxOS before sandboxed Google Play became available on GrapheneOS. At that time, CalyxOS seemed to be the best choice in terms of app compatibility. This is no longer the case. (However, for my use case, I haven’t yet found a compelling reason to erase my phone running CalyxOS and update it to GrapheneOS.)

With GrapheneOS, you can expect to receive more timely security updates.

This is the main reason I switched, I was tired of waiting for Calyx to get Android 13 when Graphene had already had it for a few weeks/a month

Don"t know about CalyxOs, but 2 things bug me with Grapheneos:

1 - they require Google phones. Ughh. Just watch a couple of Snowden’s videos when he opens devices and pulls out the little snitch microchips inside phones. I cannot imagine Google passing on the opportunity to “mod” its phones to allow for greater surveillance powers. That definitely could impact Grapheneos.

2 - Grapheneos makes a couple of telemetry-style connections: google.psds.grapheneos.org and supl.google.com. The first one is to get faster coordinates for GPS, but these connections happen 5-10 times per day. suple.google.com is a more serious problem. Grapheneos devs should absolutely put a toggle so that users can prevent this connection to Big Brother. Btw, I’m blocking both and my phone finds the gps just fine. Still, be better to allow users to block at system level instead of dns filtering.

This is unlikely as most people don’t install custom ROMs, so it would be a waste of money for Google as they could target almost everyone by doing it (easier & cheaper) on the OS level. Doing something on a lower-level (such as hardware) would only help Google target the small percentage of custom ROM users, and wouldn’t really be worth it when they could target a much larger crowd with more ease and less cost.

I am also curious how security of Graphene OS hold against iOS.

I think it’s better in both privacy & security. Although i’m not 100% sure if it’s better security and if it is, it won’t be much better. But privacy is definitely better on Graphene

This is unlikely as most people don’t install custom ROMs

I share Thomas’ lack of trust in Google. Why would anyone trust what they do behind closed doors (code), especially with their history and knowing the fact they were funded by CIA/DARPA? Use them if they fit your threat model which, hopefully, will be scrutinized in perpetuity.

As for me, I have a Pixel phone w/GrapheneOS because it best fits my needs- for now. Stops many active & passive threats, if used judiciously. I’ll switch in a New York minute if I find reason. And I’m always looking for a reason, because my trust level there is not high.

Also:
-Never trust Google.
-Never stop investigating them nor supporting those who do.
-Never stop applying political pressure to return them to their initial (disingenuous?) motto, “Don’t Be Evil”.
-Never stop supporting the socially aware BigTech workers who apply political pressure from within, such as these courageous Jewish Google employees who protested Project Nimbus, a “$1.2B contract between Google, Amazon & the Israeli government & military”
Google’s Complicity in Israeli Apartheid: How Google Weaponizes “Diversity” to Silence Palestinians and Palestinian Human Rights Supporters

Ariel Koren’s story needs to be heard. Among many others there, she is a hero. REAL whistleblowers (or simple ethics-pushing employees) do not get invited to the White House, nor do they get big book deals nor any mention in media unless it’s character attacks in defense of their corporate benefactors (see any William Binney vid or >>A Good American<< great documentary)

Morality is a human code of conduct. Corporations, like Google (and countries, for that matter), are neither moral nor amoral. Nor are these multi-national entities patriotic, which so many fail to consider. And their actions won’t mimic those of a moral person unless there’s financial stake to do so. Ostensibly they exist as long as they are profitable. Though we should all recognize that many (Tesla) are puzzlingly unprofitable, yet have stock prices that not only don’t fall, but rise. Why is that? Good question for BlackRock, State Street & Vanguard, the “Big Three”, where real power lies.

Maybe they serve other purposes as well. Someone far smarter than me said that the primary function of WAR has always been to funnel public money to private corporations (and their executives and stock shareholders). Now go back and understand that BigTech (GAFAM + Tesla), are among the largest military contractors on earth. So in essence, they serve as the funnel, among other things.

The Fourth Industrial Revolution is a thing. It’s not going away, despite every effort to either ignore it or muddy its existence or inertia. It doesn’t happen without BigTech at it’s core. So it makes no sense for us common world citizens to not learn and read what they’re saying in open forums. They have a plan for us and it’s not hidden at the top of the masonic pyramid. Instead its in NYTimes, WSJ, Newsweek op-eds, various think tank essays and extensively throughout the World Economic Forum’s web site

Started out a small Google comment and I went full Industry 4.0…geezus, not my intent. Anyone wants to chat privately, hit me up. And fk the Goog, from an unloyal Pixel user

Agree. I think iOS is a good option for the average person both in security and privacy than stock android. GOS is better for privacy, but comes at a cost of convenience.

I think for security iOS is slightly better since they seem to be offering 5+ years of software updates (happy iPhone 8 user, waiting for usb c iphone to upgrade to) and 7+ years of security updates.

It would be VERY worth your while if you are trying to and understand and track the sub-population of folks who use grapheneos/are very privacy conscious. We are a potential threat to their business problem, so in my view they have every incentive to have detailed information on the non-conformists.

Exactly. And the fact that Google has started weaponizing our data against us since about 10 years ago (i.e project Redirect) is worrying enough. No two individuals has the same Google search results. That in itself is extraordinarily worrisome. Your results are part of a reality that Google is creating just for you. But it’s not reality you want to have, but Google’s assigned reality for you. A reality to ensure you remain a benevolent, obedient, non-questioning citizen.

I use StartPage currently. Tried Searx- too much work finding consistently working instances

Unfortunately (or fortunately, depends on you) Google makes the most secure Android phones as of now.

That is an assumption. Anyone can use Wireshark to find out if that is the case. I trust the Graphene team and other researchers to do it. Also I don’t think it’s google’s best intention to spy on ~2% of the people who installs a custom Rom on their device.