Discourse Chat is now available, a Discord/Matrix like tool

Apparently there is an open beta for Discord/Matrix like functionality in Discourse! I don’t know how this will work or if it will be a good fit for this forum, but I figured folks on here would like to know about it.

I know that Matrix is trying to solve the problem of decentralized, modern chat and collaboration. However, seeing something similar to the channels and spaces I’m familiar with that doesn’t also have the challenge of federation in the backend also sounds nice. Maybe because the scope is limited it will be easier to provide features and polish.

I think Matrix is important, don’t get me wrong. 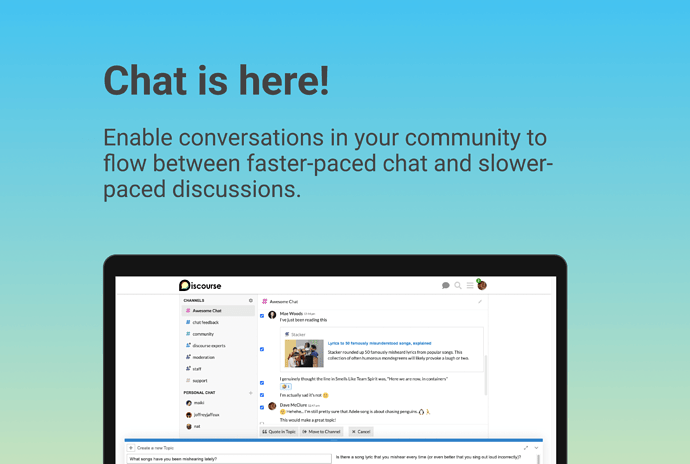 Discourse Chat is now available. Try it out today!

Chat is here! Enable conversations in your community to flow between faster-paced chat and slower-paced discussions.

Could be something to take note on for the future, I find it difficult to believe it would have traction though. I say that because even matrix which has existed for so long has barely any mainstream adoption, and many people that use discourse use it for the forum not the chat, otherwise they’d be using Discord (or matrix).

The way I see it, Discourse Chat benefits from being a plugin for the forum. So instead of having a Discord and a forum, you just have one platform that can do both. I don’t think the sell is to use Discourse as a replacement for Discord. I think the sell is the forum and then people may be tempted by the Chat feature once it’s out.

The duality of chat vs forum isn’t new though. I know Gilded integrated a forum feature into their product. Discord recently did the same. Reddit has been playing with live chat for about a year or two now. So it’s a common problem that these platforms are facing of wanting to accommodate both long-form, asynchronous discussion and short-form, synchronous chat.

The unique value of Discourse’s implementation is that you get an independent instance of this functionality. Your instance doesn’t live on another company’s platform where you’re subject to their rules, policies, and problems. It also doesn’t have to reinvent the wheel like Matrix in being it’s own protocol. It’s an open source chat platform that you own and run. That’s it.

But we’ll see if that actually works out, lol. It’s just in beta right now.

In the case of Techlore, I don’t think the Discord is going anywhere any time soon, even after years of Discourse Chat being potentially available.

As far as it relating to this forum, we’ve heard of it and have tested it here, but it’s not quite at the state where we’d want to use it, yet. We’ll definitely be keeping an eye on it as it develops though.